Drupal Camp Colorado was held at the DPPA Event Center located just outside of downtown Denver on June 27th and 28th 2009.

This was my first Drupal Camp and at the time it was the third Drupal event I had attended. By that time I had been developing sites using Drupal as a full time occupation for about a year and I wanted to give back to the community. This is where I discovered how large and awesome the Colorado Drupal community is in Colorado. Around 230 people attended not just from Colorado but from around the county. It was really more like a convention than a traditional camp. Local vendors supported the event, which unlike many other camps had a well organized, dedicated web site and planned structured sessions. 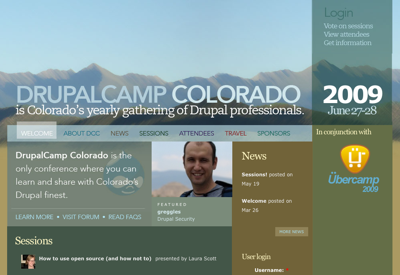 I was new to the event but I did manage to volunteer and helped arrange the provided lunch for everyone on the second day. I worked out a deal with a local restaurant to deliver gourmet pizzas, vegan salads and drinks. Luckily, everything went to plan and the Pizza was a great hit and well under budget.

The volunteers worked really hard on the making the camp successful and it was awesome. As I attended the sessions and hung out helping new people get started in the Birds of a Feather room, the excitement could be felt in the air. So many people learning, collaborating, helping each other and having fun, it was truly inspirational.