Drupal Camp Colorado 2013 was held in beautiful Boulder Colorado and was quite successful. The attendance was significantly lower than the 2011 and 2010 camps but we still had lots of fun. Lunch was not catered this year but it kept the price super low. It seemed like everyone enjoyed crossing Broadway to find some food at the Whole Foods Market and nearby restaurants. However, I did miss the social interaction that serving lunch to the attendees provides.

I was honored to participate as a volunteer and personal sponsor this year. I am looking forward to contributing more next year. I assisted with the sponsorship wrangling, sponsor invoices and chipped in a little on building the web site. The sponsorship team was awesome. Everyone really contributed at the highest level and I learned a lot especially from Jon. The Drupal Colorado community is so fortunate to have such friendly and generous sponsors. Hats off to them and full round of applause.

The sessions were great this year. I especially enjoyed Nathan Haug's presentation on Simple Recurring Subscriptions with Recurly. Recurring payments are difficult to handle and Nathan's approach is very well thought out and reasonable. It is much easier to use a software as a service to save on development time and the server performance overhead that comes along with adopting larger e-commerce packages such as Drupal Commerce and Ubercart. Recurly also has pricing structures that can prove to produce significant savings on transaction fees when configured correctly. Nathan did a masterful job of presenting the complicated fee structures for recurring payments and clearly made comparisons. This is super hard to do but he nailed it.

Aaron Ott conquered the task of covering for Karyn's in the session: Creating tests to ensure sanity was a great success. There was quite the testing discussion near the end of the session which was interesting and he did a great job presenting Karyn's slides. We should all do more testing and I had never thought of writing tests first before working on the rest of the code. That was an interesting workflow produced in the discussion. I am a fan of SimpleTest for PHP but it was good to learn that PHP Unit is picking up steam and that Drupal 8 will likely adopt it because it is the choice of the Symfony framework.

The parties were interesting and friendly as usual. But I think the group is slowing down on the beer intake! It was great to see everyone and meet some new people as well. I am looking forward to the next Drupal Camp. See you there! 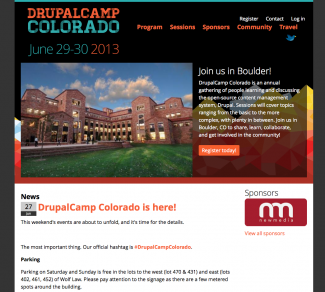