There are several other "weather widget" type modules available as Drupal.org projects. I tried most of them before coming to the conclusion that I needed to create my own. I found that most of the other weather widget projects did not work without significant errors, considerable performance expense and were quite complicated to install and configure. Also, none of the other weather widget modules that I tested uses the simpleWeather jQuery plugin which I found to be very well written and uses the Yahoo weather WOEID to generate a current weather report for nearly any location on planet Earth. I thought this functionality was awesome enough to push the Simple Weather module forward as a Drupal project and share it with the Drupal Community.

There are two fields that can determine the location of the weather report: US ZIP code field and the Where On Earth Identification (WOEID) field. The data in these fields are passed to the simpleWeather jQuery plugin that queries the data from Yahoo's Weather service and returns it for display in the Simple Weather block. There is also a field that sets the temperature scale as Celsius or Fahrenheit and returns the information accordingly.

The module is authored to honor Drupal's coding standards and is written to leverage the Libraries API module as a dependency. 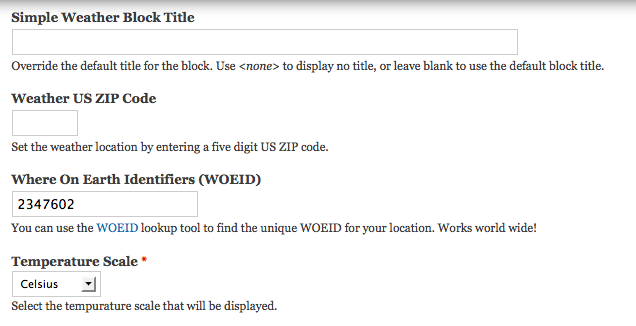 Download and install it to try it out for yourself. Feel free to send feedback or file an issue.